A Hunt for the Best Brunch in Downtown Charleston, SC: 21 Places 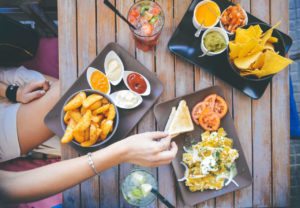 The South is famous for its comfort food.

And that holds true with the unique additions to the American breakfast diet.

Any place that could create unique concoctions like chicken and waffles must know what they’re doing. Brunch in Charleston, South Carolina, is certainly no different. There are so many places opening and closing that locals and tourists alike can get breakfast out regularly without getting bored.

But then you’d be poor.

In fact, I had to scale back on my brunching habits about a year ago because it was eating-up a growing portion of my monthly budget. It got even worse in the summer months, when open-air patios lent themselves so well to a late morning brunch. And once the weather got too hot, brunches usually migrate up to the rooftop bars and restaurants of Charleston to take advantage of the ample breezes.

Meeting up with friends for the best brunch in downtown Charleston, SC, or slightly farther afield is still manageable, just not everyday. And I do more often recommend the less-expensive places.

Before exploring town or enjoying a Sunday Funday, a decent brunch in Charleston, SC, is required. Read on to find out where to enjoy the best breakfast first downtown, then farther afield in the Charleston area.

13 of the Best Brunch Restaurants in Downtown Charleston, SC

This Charleston landmark is always popular. It’s supposedly, “a restaurant for tourists”, though this writer enjoys it. The Southern-inspired menu of Hominy Grill is what put this Charleston restaurant on the map. One of their signature dishes, called the “Charleston Nasty Biscuit”, consists of fried chicken smothered in sausage gravy and cheddar cheese and then accompanied by a biscuit. Terrible for your arteries, but it’s an absolute delight. There are other major staples expected by the Sunday brunch crowd, like:

This restaurant is awesome. Their famous duck club sandwich is stupendous, but a Sunday brunch here may well be worth missing church if it means getting a table. Compared to some of the other places to eat on this list, the mimosas and Bloody Mary’s are a steal. The drinks, as well as a bottomless cup of Joe, go perfectly with house-made biscuits and gravy. The amazingly delicious Garbage Plate, which features:

All on a bed of their famous French fries fried in duck fat and smothered in sausage gravy.

Reading things like that, it’s no wonder obesity is a fairly common problem in the South. The Tattooed Moose has another location on John’s Island. One of my favorite things in Charleston that’s only at the Johns Island location is the Loaded Bloody Mary. It’s a Bloody Mary served with:

Piled on top of the glass.

Plan to be at the Tattooed Moose on a Sunday, as Saturday brunch isn’t served here.

Moe’s is my favorite downtown Charleston bar: it’s cheap, and it’s around the corner from my house.

And their Sunday brunch is pretty awesome, too. And it’s cheap for downtown. A filling-breakfast can be had here for under $10 (though not if you’re drinking, of course). 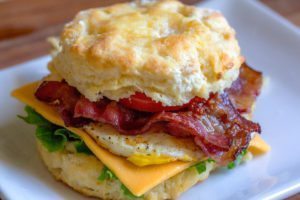 After enjoying a delicious dinner at one of the most romantic restaurants in Charleston, be sure to head back the next morning for Sunday brunch! Guests to Poogan’s Porch are greeted with hot biscuits in a basket before they order any brunch on the menu. Their brunch includes such fantastic items as waffles, fried chicken, the Charlestowne Fry, cinnamon French toast, and omelets. Poogan’s Porch is one of this writer’s favorite fine dining restaurants in downtown Charleston, SC. Though I may have mentioned that before.

This place is pretty down at the heels, especially when compared to other King Street bars and restaurants like Stars and Prohibition (let alone Hall’s Chophouse). A.C.’s Bar and Grill provides something rare now on King Street, however: delicious but still cheap Sunday brunch. The inside can be a little dark, and the service can be a bit lacking. For example, you place your order at the bar, and grab your food from the counter in back when your number comes up. Seriously, though, let’s face it: you’re here because you’re hungry and likely hung-over after a night out at downtown Charleston bars. I’m not really in the mood to chat it up with waitstaff when I’m in that shape. And fried comfort food is just what the doctor ordered when you’re feeling your worst on a Sunday morning.

Located on King’s Street a few streets up from Blue Bicycle Books, this Southern-styled restaurant serves classics like:

This writer often finds himself craving the biscuits and gravy from here. And while the sake-based Bloody Mary at Virginia’s on King is not for everyone, this writer has to admit to being rather partial.

I have to put Callie’s Hot Little Biscuit somewhere on this list, so it might as well go here. It’s not exactly a sit-down restaurant, as it’s located in a former alley on Upper King Street. However, the biscuits are pretty damn good. The only frustrating part is waiting in the line. After going every weekend for a month or two, I stopped a while ago. I’m not a fan of long lines, delicious biscuits or no.

Come here for the cornbread served with honey butter, which is as amazing as it sounds. The menu of Edmund’s Oast includes a vast beer selection, biscuits and gravy, creative cocktails, fresh charcuterie and bacon burgers.

Voted Best Breakfast in Charleston (and a Must-Eat by the New York Times) this southern restaurant is well-known for their bottomless mimosas. Wash it down with Toast’s special Sweet Tea Glazed Chicken. 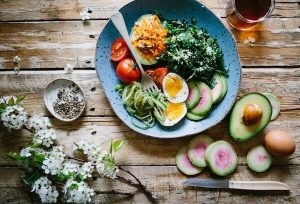 The cozy though industrial feel of Butcher and Bee serves a perfect backdrop for their sandwiches and late-night servings of food. They’re also known for their Saturday and Sunday brunches as well. Their sandwiches (what they’re best known for) are regularly changing, though always inventive.

This Upper King Street restaurant is known for its breakfast food, regardless of the time of day. Regular featured menu items include tasty tomato soup chicken, waffles, grilled cheese sandwiches and fish and chip. They also serve double track burger, mustard, and pickles. While not necessarily a traditional brunch item, Rarebit Moscow Mules are awesome.

The clubby yet elegant atmosphere of High Cotton is certainly appropriate for weekend brunch. The brunch menu is known for its andouille-infused shrimp and grits, apple-smoked bacon, crab cake eggs benedict, and bourbon glazed donuts.

I have to admit I’ve not eaten here, but I’ve walked by the display of Sunday brunch buffet on my way to church on Sunday morning. I must say I’m consistently impressed. While I associate Stars Restaurant more for their rooftop restaurant and bar than anything else, the food looks delicious.

Quite a few of these are the higher-end establishments when you need or want to impress somebody. Or when someone else is paying.

Magnolias has been on East Bay Street in downtown Charleston forever. It serves pigs in a blanket, country fried steak and eggs, a fried egg sandwich and blue crab benedict. Magnolias is exquisite and is known as one of the best high-end brunches in Charleston. It is ideal for those who expect to spend a bit more on a casual brunch at a well-established Charleston eatery.

Triangle Char and Bar claims to serve the best burger in Charleston. On weekends, they serve up an exciting brunch menu ranging from cinnamon rolls to chipotle barbecue pork eggs. They also serve shrimp and grits, and house-made Belgian waffles. Wash your meal down with the spiciest Bloody Mary in all Charleston or mimosas by the carafe, and you’ve got yourself a great brunch. And although the draw in this article is a Charleston brunch, the grass-fed burgers at Triangle Char and Bar of Avondale really are something to experience. 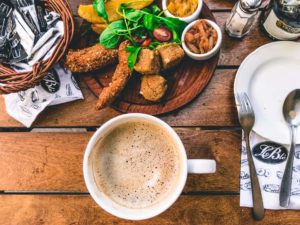 This John’s Island restaurant celebrates the Lowcountry’s French culinary traditions. It draws people throughout the week to Johns Island, though the biggest attraction is definitely the Sunday brunch. The menu of the Fat Hen changes regularly. Some common appearances include the likes of country fried steak, crème Brulee French toast, and chicken pot pie. This great brunch spot is only thirty minutes away from historic downtown Charleston.

In a historic clapboard home in the charming neighborhood of Old Town Mount Pleasant sits the The Tavern at the Old Village Post House Inn. This Old Town MTP landmark offers a fairly diverse brunch menu with options such as:

Don’t miss the Bloody Mary’s made with jalapeno-infused vodka. While the bar is small, they do have a (small) patio and are only a block away from the waterfront. It’s a great start to an afternoon exploring Old Town Mount Pleasant. It’s a short distance from the Pitt Street Bridge, not to mention the Pitt Street Pharmacy.

This restaurant is a bit of a trek from downtown Charleston out on the Isle of Palms. The trade-off is waterfront views of the Intracoastal Waterway. It’s a great complement to your:

While Morgan Creek Grill specializes in seafood and steak, lighter fare is available. The Upper Deck on the rooftop provides some decent outdoor dining.

Where to Find the Best Sunday Brunch in Charleston, SC

The locations above are all fantastic choices for breakfast or brunch. But there are plenty more places to enjoy a decent Sunday brunch in Charleston. Below are a few more options of the peninsula in West Ashley or James Island.

This restaurant feels strongly about their farm-to-table reputation. The food at the Glass Onion in West Ashley is all prepared with local ingredients. Some of the more interesting items include: corned beef tongue chicken, andouille gumbo, and fried pig ear po-boy. Those less adventurous can find Southern classics such as shrimps and grits, deviled eggs, fried green tomatoes and seasonal cobblers. 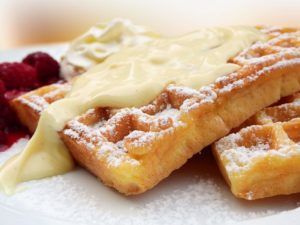 This diner was featured in Guy Fieri’s Diners, Drive-ins, and Dives, and for good reason. This classic diner has comfortable booths, funky art on the walls, and an eclectic staff (some with tattooes that have actually bothered some more conservative clientele). It serves chicken and waffles along with other brunch items. A favorite at the Early Bird Diner, besides the chicken and waffles, of course, is the Country Scramble, which features country sausage, potatoes, eggs and cheddar topped with cream gravy and served with a biscuit or toast (but get the biscuit) and a choice of a side. That’s probably the third or fourth dish featuring a dump of ingredients I’ve mentioned on this list. Whatever, they’re amazing.

This market is only for local produce from small farmers, who sell cheese, meat, milk, and other produce. This venue is also filled with crafters, photographers, and soap-makers. But the other great part about this Sunday Brunch Farmers Market hosted behind the Pour House on James Island are the food trucks. You can get a pretty decent and cheap meal here while the Farmers Market is in session. Grab some food and sit out in the nice weather.

The Best Choices for Sunday, Saturday, Mother’s Day, and Easter Brunch in Charleston

Many of the choices above are excellent locations to bring Mom on Mother’s Day or Easter. Check individual restaurants for the brunch menu on any given day. And beware of restaurants that only serve brunch on certain days, like the Tattooed Moose.

Charleston, SC, offers the best brunch in the entire South to match the beautiful, charming, and elegant locale in which the dining scene enjoys. Anyone who lives or visits Charleston should remember to enjoy the many attractions in Charleston, including the food! Be sure to explore our list of the best things to do in Charleston, South Carolina, for after you’re fully stuffed!

10 of the Best Fine Dining Restaurants in Downtown Charleston, SC

15 of the Best Seafood Restaurants in Downtown Charleston, SC