Where to Find the Best Pizza in Charleston, SC: 4 Choices Having lived in the New York area for an extensive part of my life, I know a thing or two about pizza. It can either be fantastic, or it can be something more akin to the mass-produced junk you see on TV. Or it can be served $1 per slice in New York City. But as far as finding the best pizza in Charleston, SC, the list is actually fairly short.

But first, a personal story.

How to Get Lost Searching for the Best Pizza in Charleston, SC

Recently, a new chain pizzeria announced the opening of a new pizza restaurant in North Charleston. Their PR firm contacted me to be present for a pre-opening free dinner with hopes that I would mention them on this website. While I’m not a big fan of promoting chains (or at least non-local ones), I’m also not one to turn down a free meal.

So, I planned an entire date night which was going to include a meal at this chain. Even though it was a chain, it adds a certain level of prestige for your date to have been invited to a pre-opening night dinner, no?

Things got embarrassing quickly. We drove all the way to North Charleston from downtown Charleston and couldn’t find the place. We used Waze, Google Maps, and even called the place. After seven rings and no answer or answering machine, we finally gave up. Instead, we drove a little bit further to one of our favorite pizzerias in the Charleston area. EVO Pizzeria in the Park Circle of North Charleston was open and ready to serve some great pizza.

The Beauty of Finding Locally-Made Pizza

I understand the appeal of chain restaurants (or hotels, or stores, or whatever). They guarantee the same experience, whether you’re in Charleston or Hoboken or Los Angeles. But I can promise there are plenty of small businesses in your hometown that will appreciate your money a lot more than these corporations. My desire to promote these small businesses was a major push for me to start this Charleston hipster blog in the first place.

Alright, getting off the soapbox now.

4 Options for the Best Pizza in Charleston, SC

Anyway, even in the land of shrimp and grits, those expecting good pizza can get their fill here in Charleston. And for less than a pizza would cost in some of the higher-end establishments in the Northeast. It is all relative, in the grand scheme of things.

D’Allesandro’s is, arguably, the best pizza in downtown Charleston. It’s one of the best casual restaurants in Charleston, SC for a date. It’s one of those classic pizzerias, centrally located on St. Philip Street, close to the bars of Upper King Street. The staff is super friendly and helpful. D’Al’s Philly-style, thin-crust pizzas are the main draw, though, of course. And there are a ton of options as far as sauces and toppings to go on them. My favorite is the Get Gnarly, which features:

D’Allesandro’s also usually has some sweet lunch and happy house specials. I’m told their salads and calzones are good too, though I have to admit I only go for beer and pizza. D’Allesandro’s is a great option for pizza delivery, by the way, if you’re feeling a night on your couch over a night on the town.

Monza is the other (and only, in my snobby mind) pizzeria downtown. It’s right on King Street and is in the same hospitality group as some other local favorites like:

This place is a little pricier than D’Allesandro’s. I’m guessing that’s due to the ambience and location right on King Street in Radcliffeborough neighborhood. The food’s quite good, though. And Monza‘s Neapolitan-style pizzas are baked in wood-fired ovens and just as inventive as D’Allesandro’s. I enjoyed the Ronnie Peterson the last time I was in, a famous competitor in the Formula One race in the Lombardy city of Monza. Figured out where the name came from yet?

What About DeSano Pizza Bakery?

DeSano Pizza Bakery was downtown near Taco Boy on Huger Street. Despite it being close to my house and supposedly being pretty good, I hadn’t tried it. And apparently, most of Charleston felt the same way. This Nashville-based chain recently closed-up shop. 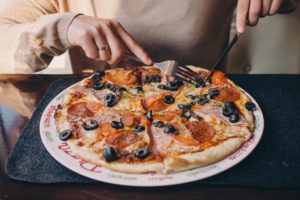 Are you looking to get out of the bubble that is historic downtown Charleston, South Carolina?  Then drive up I-26 and the Neck to North Charleston. Head to Park Circle in particular. This neighborhood is quirky and eccentric, and EVO Pizzeria fits in perfectly here. Founded in 2005 by two former workers at the world-famous FIG restaurant on Meeting Street in downtown Charleston, EVO Pizzeria raised the bar for the best pizza in Charleston, SC. EVO Pizza’s focuses on serving locally-sourced and seasonal ingredients from their neighborhood pizzeria. And they’re still going a fantastic job of doing so, 12 years later. They’ve also started to roll-out some new products, like Sweeteeth, one of your options for locally-made Charleston chocolates.

Last but not least on the menu is Orlando’s on Daniel Island. While Daniel Island is part of Charleston, the only way to get there from downtown Charleston is via either North Charleston or Mount Pleasant. As such, I don’t go much. But Orlando’s is worth a visit if you’re out that way for a concert or event at the Volvo Car Stadium. Or just want to see Charleston’s version of Pleasantville, golf carts and all.

Orlando’s Pizza used to be a tiny little parlor on Daniel Island’s main drag, but has expanded due to its popularity. The chicken parmigiana wedge is delicious, but their hand-tossed, brick-oven pizzas are what bring people here. Even all the way out on Daniel Island. If you’re looking for another one of the best Italian restaurants in Charleston, SC, be sure to check out Ristorante LIDI on Daniel Island. 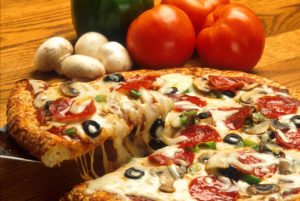 Parting Thoughts on the Best Pizza in Charleston, SC

Keep in mind that these are places where you’re ordering great pizza. As such, the best pizza in Charleston, SC, doesn’t come quickly. In my opinion, it’s all about the company you’re with enjoying an amazing meal together. And everyone needs some time to chat before and after stuffing your face with food. If you treat your meal correctly, it can be one of the most fun things to do in Charleston, SC, at night. If you want fast cuisine, go to Pizza Hut. Or go find that pizza chain restaurant in North Charleston (and let me know where it is).

10 of the Most Fun Outdoor Things to Do in Charleston, SC

Charleston City Market: the Best Parts You Need to Know