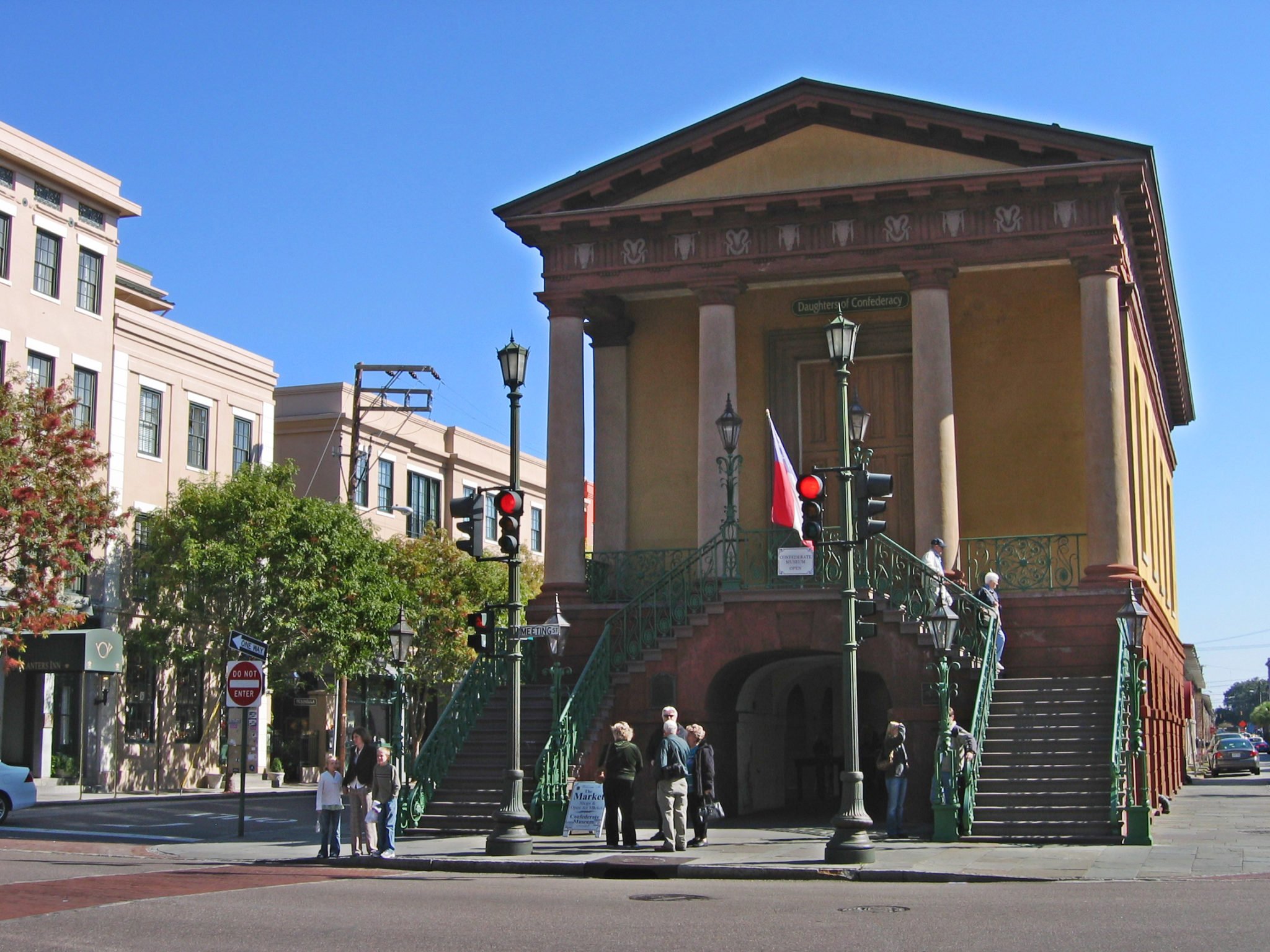 Charleston City Market: the Best Parts You Need to Know 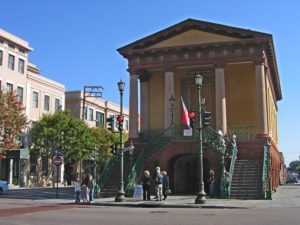 By AudeVivere (Own work) [CC BY-SA 2.5], via Wikimedia Commons

The Charleston City Market can be pretty overwhelming: it’s the biggest tourist trap in Charleston, possibly all of South Carolina! But it is one of the most famous and best things to do in Charleston, SC, so missing it is not an option. Read on to get what you need to know before you get here, and be able to pick the top restaurants, things to do, and places to stay at the City Market and avoid wasting your time.

The Old City Market is one of those places you’re obligated to at least see in Charleston. It’s beautiful, it’s historic, and many consider it one of the most significant buildings in American history. Constructed in the early 1790s, the Charleston City Market is now a central location for visitors to historic downtown Charleston.

A Quick and Easy Guide to Charleston City Market History

Charles Cotesworth Pinckney ceded land to the city of Charleston to construct a central marketplace in 1788. Until that time, vendors sold their goods in various spots around the small but growing city. The beef market was at the corner of Broad and Meeting Street, the fish market was on Vendue Range, and a produce market was on South Adger’s Wharf. After the Revolution, Charleston wanted to collect all the markets in one area.

The goal was likely to regulate commerce and provide easy access to suppliers from Charleston plantations, growers, and fishermen. Most important, the plan provided some distance from the smelly beef market and the wealthiest homes in Charleston.

The land where the historic Charleston City Market is located was a canal stretching from the Cooper River to Meeting Street. The site of the former beef market is now the Charleston City Hall.

After construction, the Centre Market as it was then known, became a center of Charleston society. Charleston’s slaves, freed blacks, and poor and middle-class whites all bought their groceries there. In a climate as hot and humid as Charleston with no refrigeration, daily grocery shopping was the norm.

The site also became a hot spot for Charleston Eagles, or the buzzards that ate the meat and food scraps discarded. Their job was so important to helping keep Charleston clean that they were protected by law. One thing never sold at this particular market was slaves. The only confirmed building used to sell slaves that still stands is Ryan’s Mart. Ryan’s Mart is also called the Slave Mart Museum, and was part of a larger structure on Chalmers Street.

The Charleston City Market spent the next two centuries surviving tornadoes, earthquakes, hurricanes, neglect and attempts to “improve” the area. At one point in the early 20th Century, only four vendors still sold anything at all in the booths of the market. Members of the city presented plans to turn the market into a park or a freight station, though none actually happened.

Charleston and tourists regained an interest in the Old City Market when the National Historic Registry designated it a Historic Landmark. After an extensive $5 million dollar renovation project, the market has recently reopened and remains one of the best free things to do in Charleston, SC.

So the next question to ask is, what is there to do at the Charleston City Market? Quite a bit, actually, and more than a few are cheap or free to do.

Where is Fantastic Shopping at the Charleston City Market? 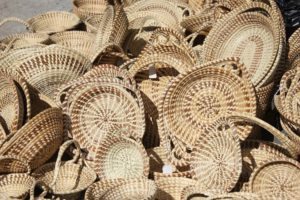 You can always relive the lives of the urban poor in the 18th Century and enjoy some of the most touristy shopping in downtown Charleston. While people back then were shopping for necessities, the majority of Charleston City Market vendors are peddling wares devoted to the tourist market.

The list of vendors is pretty extensive, but it includes everything from prepared food to jewelry to toys to works of art. The most famous items for sale at this flea market are the sweetgrass baskets, which local Gullah people make using local materials. The techniques used to make these Charleston baskets are similar if not the same as those used by West African peoples. But the Old City Market of Charleston is definitely the place to go for souvenirs from your trip.

5 of the Most Delicious Charleston City Market Restaurants

If shopping’s not your thing, you could always eat around the market. I’m not a huge fan of the various Charleston City Market restaurants, though there are a couple nice places to eat here.

Where to Find All of the Best Charleston Tours

As far as I’m aware, the market is also where you go to grab any sort of Charleston tour, especially ghost tours in Charleston, SC. Bulldog Tours and Palmetto Carriage Works are both located around here. Both provide the best respective walking tours and carriage rides in Charleston.

A Selection of the Coolest Charleston City Market Hotels

If you’re looking to stay at one of the Charleston City Market hotels, be ready to pay an arm and a leg. While these are some of the best places to stay in Charleston, you’re more than likely paying for the location. This is definitely the case at the Market Pavilion Hotel, the Belmond Charleston Place, or any of the other hotels near the market. Some of the cooler boutique hotels in historic downtown Charleston and nearby include the Spectator Hotel, and the Grand Bohemian.

While deciding where to stay in Charleston, I recommend not parking near the City Market. As a former canal, the entire street floods at the highest high tide or with a lot of rain (or both). High water levels have ruined more than a few expensive cars here.

10 More Fun Things to Do in Charleston, SC

While poking around the Charleston City Market can be fun, you’re going to want to explore farther afield. Some Charleston attractions nearby include:

I’m not exactly a huge fan of shopping myself. Shopping is a pretty big draw to Charleston for visitors from the rest of South Carolina, and even farther afield, though. King Street shopping has a lot of the stores you expect to see at such a major shopping destination: J. Crew, Brooks Brothers, and Lilly Pulitzer. It also has some great local Charleston stores like Two Cumberland.

Waterfront Park is without question one of the best things to do in Charleston, SC, with kids. The splash pad and pineapple fountain the kids can wade in will be a huge hit on the many hot days of summer. Sitting in a swinging bench and watching the ships go by in the harbor is pretty pleasant too. 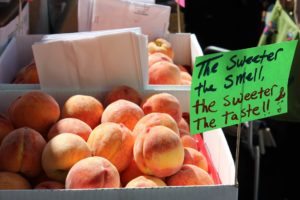 If you need more of a shopping fix, hit up the Charleston Farmers Market on Saturdays in Marion Square. It’s the largest farmers market in the country. Vendors there sell all the stuff people used to buy at the Charleston City Market, then some. Crafts, plants, food from local farmers, prepared food like pasta, sandwiches, and more are all found at the various booths.

The joke is that this Charleston Farmers Market is not much of a farmers market anymore, though. It’s crafts and high-end items, with actual farmers stuffed way in the back, close to Meeting Street.

The Powder Magazine is South Carolina’s oldest public building. It’s also the first fireproof building in Charleston. There was a legitimate fear of the building exploding from all the gunpowder stored within it in the early years of Charleston’s history. As such, the architects designed some interesting features: walls that taper in width from the bottom up, and a roof made of sand to put-out any fire that would start from the explosion. None of these properties were necessary (as it never exploded), but the building’s pretty cool to explore.

But the most famous location to visit to experience Charleston history is Fort Sumter. As the site of the first shots of the Civil War, this is almost a prerequisite for understanding the war that defined the South for much of the 20th Century and still affects it to this day.

7. Cathedral of St John the Baptist

When I first moved to Charleston, this was the first church I attended. While I no longer attend it, it’s still a beautiful church to visit on Broad Street. The first cathedral of brownstone was built in 1855 to serve the Irish-Catholic community in downtown Charleston before it burned in a fire in December 1861. The Cathedral of St John the Baptist was built on the ruins of the old church. The cornerstone was laid in 1890, and construction was completed in 1907. Due to lack of funds, the steeple wasn’t added until 2010, though the bells were set to be in harmony with the church bells of St John’s Lutheran Church up on nearby Archdale Street.

While not exactly near the Historic Charleston City Market, no one should visit the Charleston area without checking out one of the beaches near downtown Charleston. Some of the best beaches near Charleston, SC, include Sullivan’s Island, Isle of Palms, and Folly Beach. 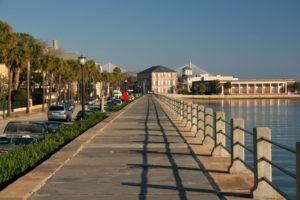 Walk down from the Old City Market and down East Bay (or along the Cooper river and Waterfront Park) towards the end of the peninsula to find Rainbow Row, the Charleston Battery, and White Point Gardens. The Battery is another of the most famous tourist attractions in Charleston, and for good reason. The houses lining the park and the waterfront are beautiful and historic. A stroll here is gorgeous and free, even if the real estate is not.

Yes, another attraction that’s not downtown. But Boone Hall Plantation and Gardens is well known in most parts of the United States and around the world for being a filming location for such famous films as the Notebook. It’s also a well-known wedding venue. And it’s just plain beautiful. If you’re deciding on which of the Charleston plantations to visit, this should be on the short list.

Keep Planning Your Visit to Charleston

I’m guessing most people planning their visit to Charleston are going to start with a trip to the Charleston City Market. But there are so many more activities in Charleston, SC! Keep exploring the Best of Hipster Charleston to see all the best tourist attractions in Charleston, as written by this hipster.

Where to Find the Best Pizza in Charleston, SC: 4 Choices

21 of the Most Romantic Things to Do in Charleston, SC