Middleton Place in Charleston, SC: An Insider’s Guide to a Jewel 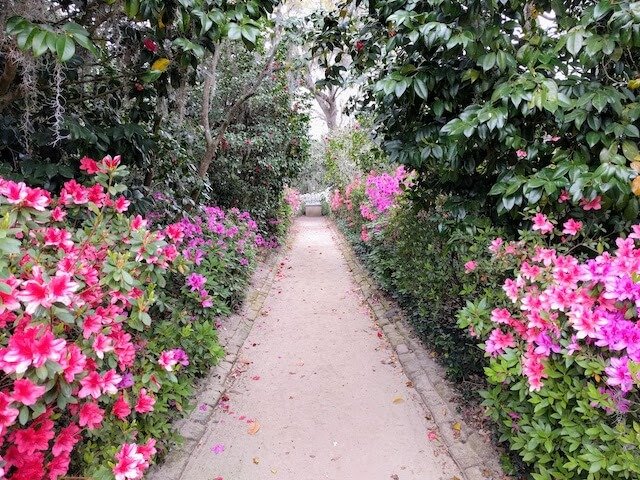 In this writer’s opinion, Middleton Place is one of the most beautiful sites in Charleston, SC.

Middleton Place is a historic plantation just outside of Charleston, South Carolina.

Henry Middleton founded it in 1741, and served as president of the First Continental Congress. Thanks to him and other Middleton family members, the plantation is a National Historic Landmark.

It’s also one of the most popular Charleston attractions.

All to learn much more about the history of the plantation and the lives of the people who lived and worked there. 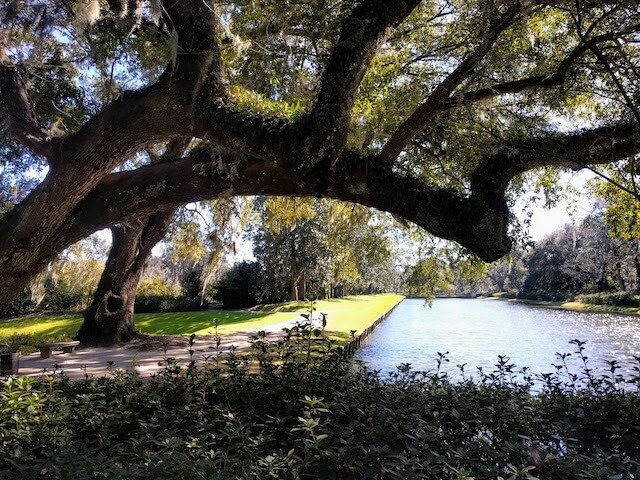 Middleton Place is one of the oldest landscaped gardens in America. As such, it’s a pre-eminent example of 18th century American gardening. The gardens, designed in the formal Georgian style, feature:

The plantation is also a museum that showcases artifacts and displays. They all help tell the story of life on the plantation and the history of the Middleton family. 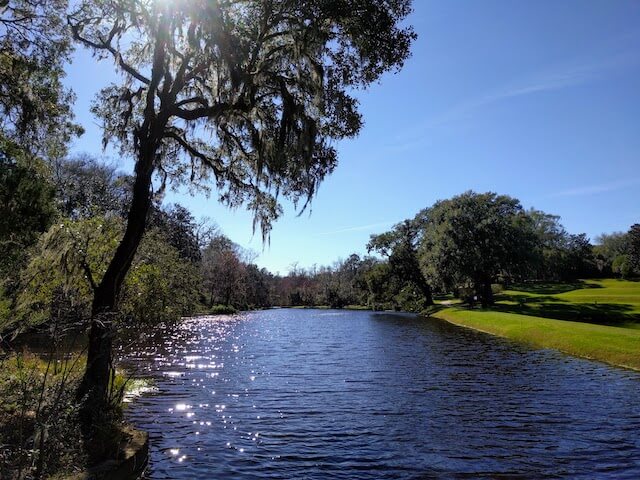 Middleton Place has a rich history that dates back to 1741, the date Henry Middleton first founded it. Born in 1717, Henry was a planter, politician, and patriot who played a key role in the American Revolution. He served as president of the First Continental Congress.

The Middleton family lived on the plantation for over 200 years. They not only made significant contributions to American politics and society during that time. The family also left a lasting legacy on the world of gardening and horticulture.

Arthur Middleton and the Revolutionary War

Arthur Middleton was the third of Henry Middleton’s eight sons. He went on to become one of the most influential figures of the American Revolution.

Arthur Middleton was born and spent his childhood at Middleton Place. He earned his education in England and returned to South Carolina to take up managing the family plantation. Mr Middleton later actively participated in the resistance to British colonial rule.

He became a member of the Provincial Congress of South Carolina and in 1775. Arthur Middleton is most famous for being one of the signers of the Declaration of Independence.

Middleton Place in the Civil War 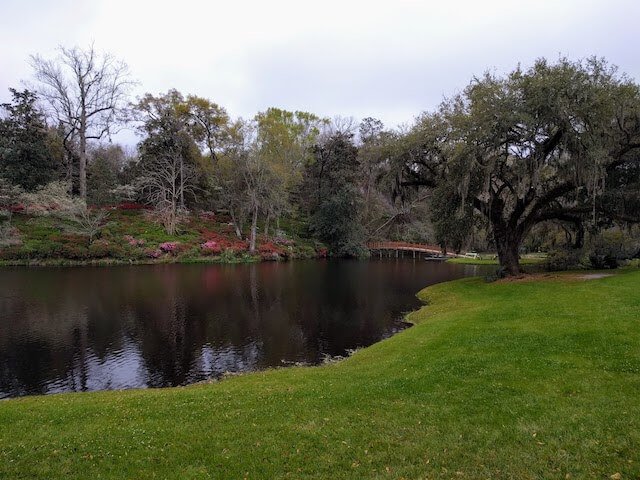 When the American Civil War broke out, the Middleton family fled to safety, leaving their property behind.

Union troops occupied the plantation and used it as a base of operations. They used the main house as a headquarters and billet, and the outbuildings and fields to quarter and feed troops and horses. They also used the stables and other outbuildings to store supplies and equipment. The gardens and landscape were also heavily damaged by the troops, as they used them to:

The troops set fire to the main plantation house in 1865, which destroyed it and the north building. The north building hosted a library with over 10,000 books and the music conservatory.

After the war, the Middleton family returned to their home in a state of disrepair. Troops had destroyed many of the outbuildings, and the gardens and fields were damaged.

The ruins of the main plantation house stood until the 1886 earthquake.

The Modern Era at Middleton Place 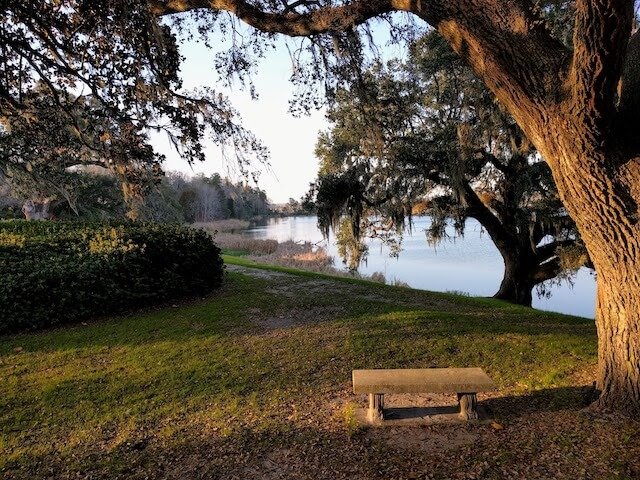 The restoration process was long and challenging. Many of the original structures and gardens had fallen into disrepair over the years. Thanks to the efforts of the foundation and other preservation groups, Middleton Place has returned to its former glory.

The foundation also focused on preserving and interpreting the history of the people who lived and worked on the plantation. They conducted:

The result is a museum that gives visitors a glimpse of more than just the contributions of the Middleton family. The museum also demonstrates life on the plantation for all inhabitants.

Features and Attractions at Middleton Place

Middleton Place is a unique destination with a variety of features and attractions to enjoy. Some of the most notable features of the plantation include: 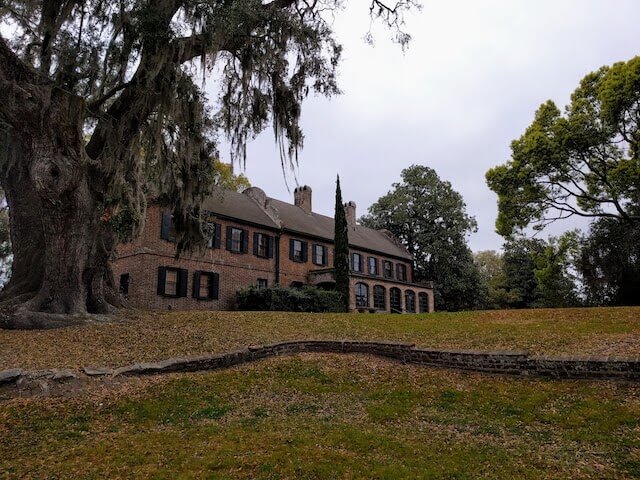 The Middleton Place House is a plantation home that dates back to the 18th century. It was built by Henry Middleton, who founded the plantation in 1741. The current house was built in 1755 as a south flanker to the main house.

Union troops destroyed the original house in the Civil War, and yet the south building still stands.

Inside, visitors can see many interesting and historically significant artifacts, including:

Contributions donated from the extended Middleton family make-up much of the collection.

The house is also home to a collection of:

All of which provide insight into the history of the Middleton family.

The tours of the house usually cover the first and second floors of the mansion. The foundation updated rooms to match specific periods of the house. Many rooms match their original appearance with many of the original furnishings and artworks.

The gardens are a must-see attraction and considered one of the oldest and most significant landscaped gardens in America.

Some of the attractions you cannot miss in the gardens include: 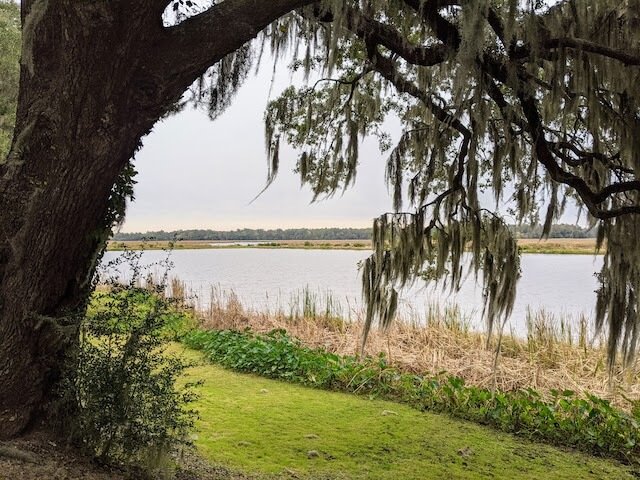 Rice was one of the most important crops grown on the plantation during the 18th and 19th centuries. It was also the crop that made Charleston and South Carolina exceptionally wealthy in the colonial era and 1800s.

Middleton Place rice was of a high quality and in high demand. As such, rice was a major source of income for the Middleton family.

Enslaved people at Middleton Place were responsible for:

The rice fields sat along the Ashley River. There, growers used the water supply to flood and drain the fields to control water levels and create ideal growing conditions. Enslaved workers tended the fields by hand with hoes, plows and similar tools.

Today, visitors can view a restored rice field near the Ashley River. It provides an accurate representation of the historical rice-growing process. The field is not actively cultivated, but it gives visitors a sense of what the fields would have looked like during the 18th and 19th centuries. 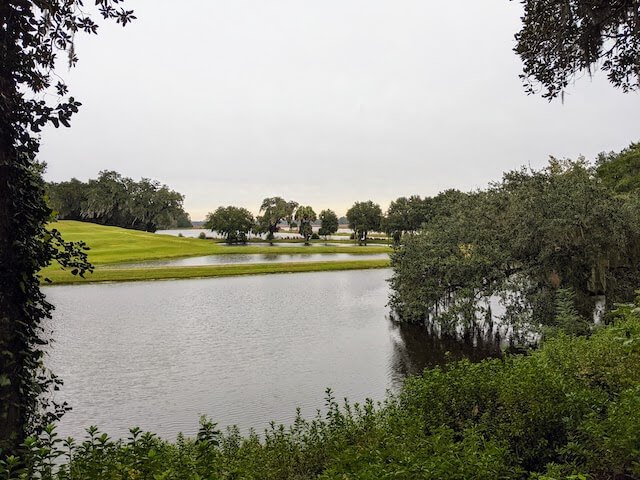 The Butterfly Lakes are two small lakes near the edge of the gardens. They are symmetrical, man-made, and identical. They gained their name from looking like a pair of butterfly wings from the top of a hill on which the mansion sits.

The Middleton Oak is thought to be one of the oldest known living specimens of live oak in the world. Experts guess it to be over 1000 years old and still thriving along an old rice field.

In the 18th century, the Ashley River was an important transportation route for South Carolina’s Lowcountry. The river provided access to markets and resources. It was the highway for transporting goods such as rice and indigo grown on the plantation. Middleton Place had wharfs and landings for ships on the Ashley River. 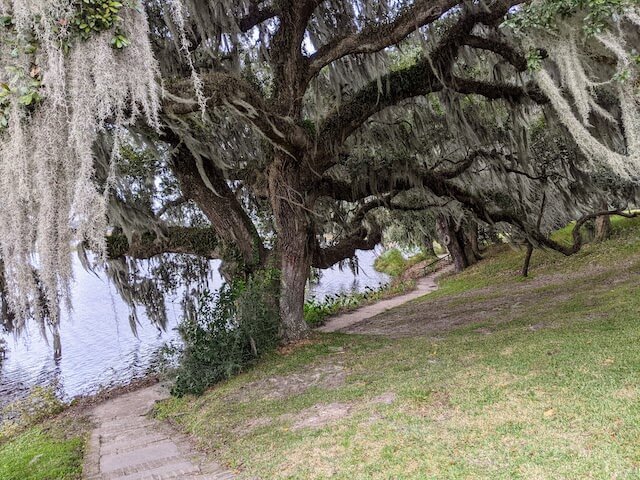 The plantation house faced the Ashley River rather than the road. Most visitors would arrive from Charleston via the Ashley River, a much smoother and faster way to travel at the time.

The Ashley River also provided a source of water for irrigation and for power. The plantation had a system of canals and dams used to control the flow of water from the river and direct it to the fields for irrigation. This system was crucial for growing rice, which requires large amounts of water.

The river also influenced the design of the gardens. Enslaved laborers used the natural terrain of the river and marshes, to create a picturesque landscape with artificial lakes, canals, and other features.

Today, the gardens and house provide sweeping views of the Ashley River. Much the same as the view in the antebellum period.

The stable yard also included a variety of outbuildings, such as:

Today, the restored stable yard provides an accurate representation of how it would have looked during the 18th century. The Middleton Place Foundation used original materials and techniques to restore the buildings.

The stable yards at Middleton Place are home to a variety of animals typical to those kept on a plantation during the 18th and 19th centuries.

Plus, an oddity or two.

The stable yards were home to: 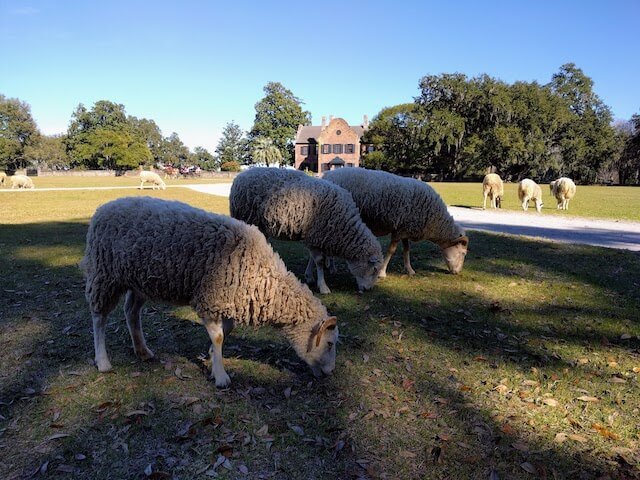 All were a common sight at Middleton Place. The animals were used for a variety of purposes, including transportation, plowing, and other farm work, as well as providing food and other resources.

Another historic variety at Middleton Place were water buffalo.

The Middletons imported water buffalo to work the flooded rice fields. They proved to be an eccentric feature here that didn’t catch-on elsewhere in the South.

The Union soldiers killed and ate five of the water buffalo and stole six when they occupied the plantation. The stolen six eventually wound-up at the Central Park Zoo in New York City.

Today, visitors can see a variety of historical breeds of animals typical of those that would have been kept on the plantation. The plantation even hosts an endangered breed or two. These animals are not used for any kind of labor.

Not even the water buffalo, which spend their days rolling in their muddy paddock.

Current Use and Significance of Middleton Place in Charleston, SC 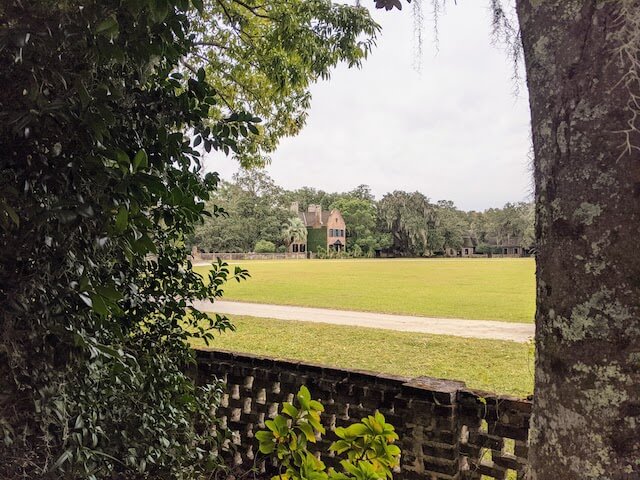 Being a National Historic Landmark has helped to preserve and protect Middleton Place and its history. It’s officially recognized as a place of exceptional value or quality in illustrating or interpreting the heritage of the United States.

But Middleton Place is not just a historical site. The plantation is open to the public for tours, and the gardens and museum are popular for tourists and locals alike. Locals also use the plantation’s buildings and grounds for weddings, parties and events.

The admission fee varies based on the time of year, age and type of visitor. Admission usually includes a guided tour of the main house and its grounds. 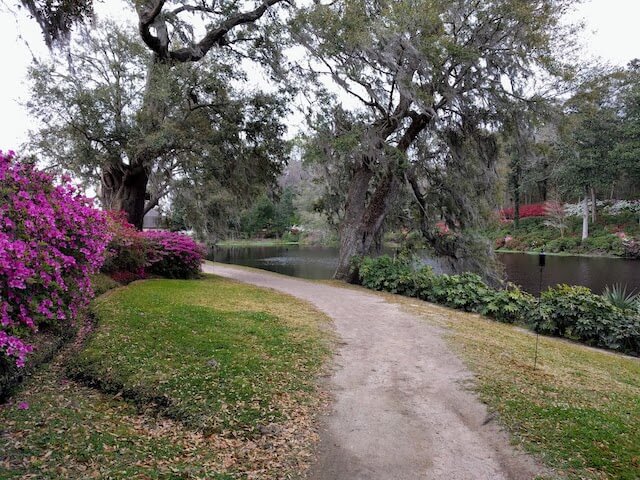 Charleston, South Carolina is home to many historic plantations, some of which include:

The Drayton family established this plantation in 1676. It is the oldest public garden in America. Visitors can tour the main house, which dates back to 1873, and stroll through the beautiful gardens, which feature a variety of plants and flowers, including camellias and azaleas.

An extension of the Drayton family built this plantation in 1738. It is one of the oldest and best-preserved examples of Georgian Palladian architecture in the United States.

This plantation dates back to 1681 and is one of the oldest working plantations in the country. Visitors can tour the main house, which dates back to 1936, and stroll through the beautiful gardens, which feature a variety of plants and flowers, including camellias, azaleas, and live oaks.

This plantation dates back to the 18th century and was one of the few plantations in the area dedicated to the cultivation of sea island cotton. Visitors can explore the restored slave cabins, the main house and learn about the history of enslaved people who lived and worked there. 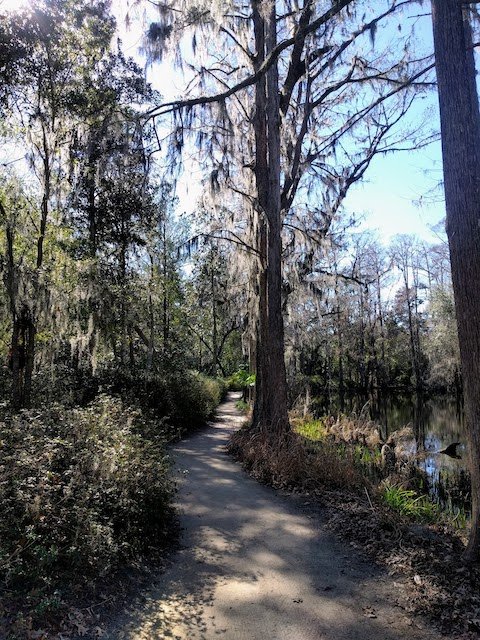 This plantation was built in 1820 and is an example of a townhouse plantation, used for commercial and residential purposes. It is an excellent example of an urban antebellum home.

Middleton Place is sure to be a highlight of your trip to Charleston, SC.