Loving Waterfront Park in Charleston SC is Not a Cliche 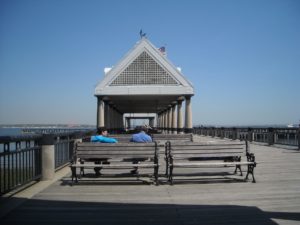 There are a couple places that stand out to me as some of the best places in Charleston:

All make the list, but Waterfront Park is one of my favorite places in Charleston, South Carolina.

One of my first nights on the town as an adult, this was the second site I visited after the Cistern (and a bar). And I don’t think I’m alone in thinking that this most iconic of the Charleston points of interest has left its mark on many other people.

How could a little 12-acre park on the Cooper River be all that special? Read on to learn about this beautiful park and the fountains for which it’s famous.

Most people don’t care about history. But if you’re coming to Charleston, you’ll be surrounded by a lot of people who do. So for the time you’re here, fake it until you make it.

Anyway, the area that is now Waterfront Park of Charleston, SC, spent most of its history underwater. The Charleston harbor used to reach as far as what is now East Bay Street.

As the city of Charleston filled-in the peninsula to create more land, the area to the west of what is now the Charleston Waterfront Park was used for storerooms and merchant homes. Many of these merchants were members of the French Huguenots. This area was the location of many of the city’s early markets, easily accessible from the water:

The markets all shifted to the Centre Market (what is now the Historic Charleston City Market) in the late 18th Century. And yet, the area they left behind remained important for Charleston’s maritime trade. 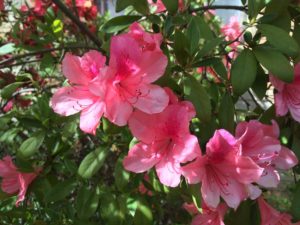 Charleston steadily lost importance in America’s shipping industry after the Revolutionary War. The decline actually started before the War Between the States. It was partly caused by the harsh restrictions placed on non-enslaved African-American sailors. Merchants often chose to ship their goods elsewhere rather than deal with onerous quarantines on freed sailors. After the War, the collapse of the local economy drove the Charleston harbor and port even further into decline.

Because of the general economic decline of the area, the wharves and piers of the area saw less and less use. The worst calamity was the burning of the Clyde steamship terminal in June 1955. The burnt pilings from that fire remained, with several gravel parking lots, were all that was left of this prime piece of real estate for decades.

In the 1970s, a real estate developer planned to turn the 12-acre area into a complex of condos and retail space. Fortunately for the people of Charleston, Mayor Joe Riley had started his first term in office as mayor. He worked for years to get the land from the developer. He even came close to taking it by eminent domain (though he didn’t actually follow-through on the threat).

In the end, the city of Charleston acquired the property and spent 10 years planning and building the Charleston Waterfront Park. At least part of that hold-up was due to the mayor’s personal involvement in the project. Joseph Riley was the decision-maker in minute details. Even the size of the gravel used was not beneath him (Mr. Riley took into consideration high heels on walking paths).

Much of Mr. Riley’s dedication to this project, as was the case with many of his later projects such as:

Was based on his belief that public spaces should be given the highest level of respect in a city. In the case of the Waterfront Park, Riley believed waterfront land should be open to all citizens, not just a privileged few.

The Waterfront Park of Charleston, SC, Becomes a Thing

That said, the park still opened only a week after its initial planned date, on May 11, 1990. And that was despite Hurricane Hugo hitting in September 1989 and inflicting about a million dollars worth of damage on the park. At completion, the Charleston Waterfront Park included:

A Virtual Tour of Waterfront Park 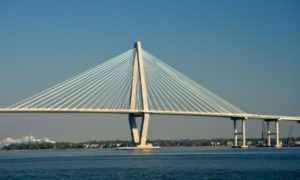 But there’s so much more here than the gravel. The 12-acres of the park are divided into 4 sections:

The Wharf and Splashpad

Visitors entering the park from Vendue Range first hit a giant fountain. It also serves as a splash pad in hotter months of the year. Walk past the fountain towards the Cooper River to see Vendue Wharf in front of you.

The Vendue Wharf is a wide, wooden pier that extends into the water as far as the burnt pilings of the old steamship terminals. Those burnt pilings are still visible in the water, by the way. The pier features covered swinging benches and fantastic views of the Charleston harbor. Sit on one of the benches on the floating dock at the end and admire the various points of interest of the harbor:

The Shaded and Water-side Walkways of Waterfront Park

But the majority of the park still remains to be explored. Walk in the direction of the Battery and White Point Gardens into two separate sections that abut each other.

One area is densely planted with oak trees, azaleas, and boxwoods. It features plenty of benches for visitors to sit, relax, and even slouch (all part of Mr. Riley’s plan for the park). An open lawn and esplanade planted with palmettos sits between the shaded area and the water. This setup suits Riley’s initial plan just fine of giving water access to all city dwellers. In the center of the lawn sits one of the most photographed sites in Charleston: the famous pineapple fountain of Charleston, SC.

The pineapple is the universal symbol of hospitality in the South.

Did you know that this tradition actually originated in Charleston?

Tradition held that it was improper for women to entertain at home when their husbands were away from home. In a merchant town like Charleston, this happened a lot. When merchants returned home from abroad (many from the West Indies), they’d bring a pineapple with them. Upon arrival, their wives would display the pineapple prominently at the front of their Charleston single home. The pineapple would announce that their home was open and welcome to visitors.

And today, the pineapple has been set in bronze as the symbol of hospitality in Charleston. It is also the second-best fountain to splash around in Waterfront Park (the splash pad off the Vendue Range is better). Before you splash (or just take a picture of the pineapple fountain), feel free to dip into the City Gallery at Waterfront Park. The Charleston Pineapple Fountain sits directly in front of the City Gallery, which is another free Charleston attraction by the way.

If you’re feeling like supporting the arts, you’ll find prints of the pineapple fountain for sale all over Charleston. My favorite print is at Images of Charleston on King Street.

The Quiet and Scenic Pier

Continue walking down towards the southern end of the park, and the pathway will curve back towards Concord Street to match the curve of the coastline of the restored marsh. Where North Adgers Wharf meets the end of the park, a formal line of heavily-pruned trees leads to another pier not as heavily visited as other parts. This particular pier is made of the 17th Century granite that originally graced the pier at its current site. The granite was actually fished out of the harbor to use in the same footprint as its historic appearance. This particular wharf makes for a romantic experience, as it’s not as heavy with tourists as other parts.

The Best Time of Year to Visit Waterfront Park 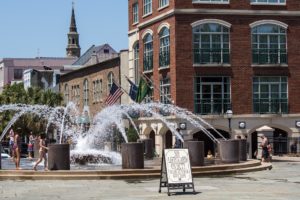 But it doesn’t matter where in this little park you go, it’s a wonderful place to visit. I recommend giving yourself about 45 minutes to meander through the entire park, especially on a clear day or evening.

Its swinging benches, shady areas with benches and water fountains, and piers overlooking the water make this one of the most romantic spots in Charleston, SC. Any time of year is ideal to show-off your romantic side here. Let’s face it, even those two bad weeks in February aren’t that cold in the grand scheme of things.

Meanwhile, as I learned from experience, the various fountains, the swinging benches, and opportunities to see dolphins make visiting here one of the best things to do in Charleston, SC, with kids. That’s especially true in the summer months. Don’t forget that a parking garage is literally right next door (as well as free bathrooms in the parking garage, easily accessible from Vendue Range). Easy parking and bathrooms make this even better for a quiet summer afternoon with the kids.

Places to Stay Near Waterfront Park

There are a lot of options, actually. Some of the best boutique hotels in downtown Charleston, SC, are an easy walk. The list includes:

Some other nearby Charleston points of interest include the Historic Charleston City Market, Rainbow Row, the Battery and White Point Gardens, and the various churches of the French Quarter. But seriously, the Waterfront Park of Charleston, SC, is without question one of the best things to do in Charleston, South Carolina.

10 of the Best Boutique Hotels in Downtown Charleston, SC