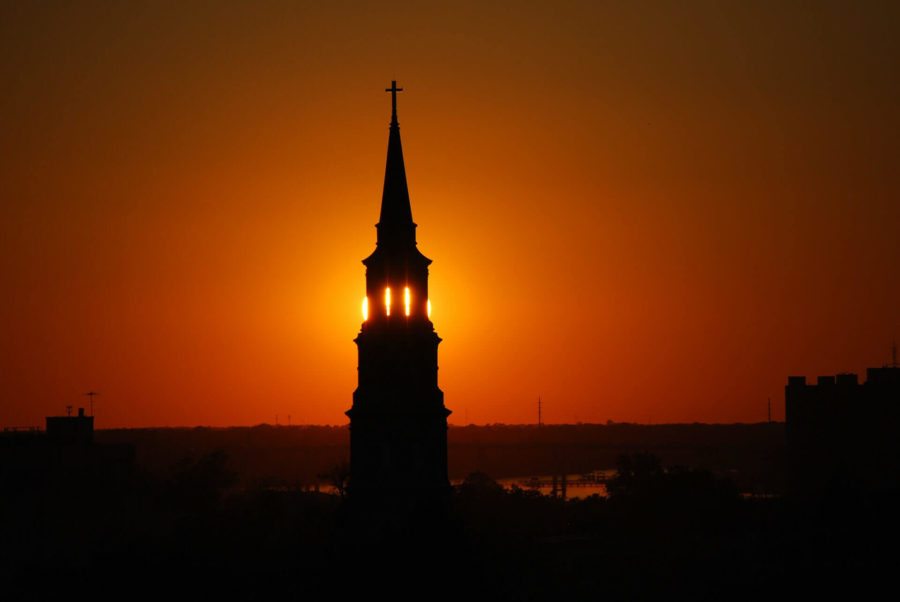 Historic Downtown Charleston: A Hipster Guide to the Best Here That is something Charleston may want to say on a regular basis.

Once money again flowed-in after Hurricane Hugo, the most recent Charlestonian renaissance was able to take off. But by then, Charleston was sensible enough to recognize the benefits of keeping their gorgeously inefficient old buildings. Groups like the Board of Architectural Review and the Historic Charleston Foundation have been integral in preserving the historic downtown. Now, rich people don’t buy historic homes and knock them down. Instead, they buy them and live in them for about a week per year. Of all the attractions and activities that make living in Charleston so spectacular: the beaches, the food, and the people; the beautiful streets of historic downtown Charleston are what drew this hipster here in the first place. But there is so much more to the Charleston historic district than just pretty buildings. The cultural capital of the South is still the place to feel the pulse of Southern culture. From some of the best fine dining restaurants in downtown Charleston, SC, to the famous attractions, there is plenty to keep both visitors and residents busy. Most of the best things to do in Charleston, SC, are situated downtown, including the Historic Charleston City Market.

Wandering around historic downtown Charleston neighborhoods is one of my favorite outdoor activities here.

The People of Historic Downtown Charleston This is what would be called an “up and coming” neighborhood. The Westside neighborhood was still kind of scary when I first moved here, I remember my roommates recommending avoiding parts of it at night. Now, yuppies are taking over this part of town as well.

Things to Do in the Westside Neighborhood of Charleston

What is a residential neighborhood features more than a few fun things to do. For example, a recent date night featured a Riverdogs baseball game at the Joseph P. Riley, Jr Park. Another well-known Westside attraction is Brittlebank Park and the Greek Orthodox Church of the Holy Trinity. The Greek Orthodox Church hosts a Greek festival every May that’s pretty fun.

But the places to eat here in Westside are an attraction in their own right. Some of the heavy hitters for this neighborhood include:

Hotels and Places to Stay in Westside

Westside actually has many of the most inexpensive hotels in Historic Downtown Charleston. Across Fishburne Street from Brittlebank Park sit a Holiday Inn Express and Marriott.

The Hampton Park Terrace neighborhood is that borough I mentioned that is only a few streets long. This little neighborhood is only three blocks wide south of Hampton Park. This neighborhood is largely residential, though the houses are beautiful old mansions from the early 1900s. While many were converted to apartments, some remained single family homes, and many are returning to their original use.

If you’re looking for restaurants or things to do in Hampton Park Terrace, you’ll have to walk over to Westside or Wagener Terrace. As I mentioned, though, they’re not exactly a strenuous walk to get there.

This is a big stretch lumping together a few smaller neighborhoods of Wagener Terrace, Longborough, and Lowndes Point. This largely residential area is all north of Hampton Park. I’ll be honest, this is kind of a big, nebulous neighborhood. But I Live in Wagener Terrace Facebook group is a good one to follow for all things related to the neighborhood.

Restaurants and Things to Do in Wagener Terrace

But there’s a lot going on in Wagener Terrace. The neighborhood stretches from the Citadel and Hampton Park over to Magnolia Cemetery.

It has some fantastic places to eat. More than a few make my list of the best casual restaurants in Charleston, such as:

The North Central neighborhood is another area of the peninsula that is changing rapidly. And by changing, I mean gentrifying.

Places to Eat and Things to Do in North Central

There aren’t a ton of things to do here, though the Palmetto Brewing Company is just on the other side of the 526 overpass on Huger Street. There are some decent restaurants along King Street, though:

These two always get lumped together, named after their respective streets that pass through the middle of their neighborhoods. Cannonborough and Elliotborough are one of the top places to live in historic downtown Charleston now. Real estate and rents are not as expensive as further down the peninsula, and these neighborhoods are very livable.

Things to Do and Places to Eat in Cannonborough/Elliotborough

There are a lot of great shops and restaurants here in a very walkable neighborhood. Not counting the restaurants and bars along nearby King Street, some culinary highlights include:

Places to Stay in Cannonborough/Elliotborough

As far as I’m aware, there are no hotels in this neighborhood. But this is the location of Charleston’s only hostel: Charleston’s Not So Hostel. This is also the only neighborhood in historic downtown Charleston where vacation rentals are permitted. You’ll find plenty of options if you take a look. To quote a guy on one of those home buying shows, the Eastside neighborhood may be an up and coming neighborhood, “but it ain’t up and come yet”. Eastside features dive bars and the haunts of poor college kids. This is one of the last neighborhoods on the peninsula where real estate prices and rents are not yet ridiculous. Some major renovation projects are going in on this side of the peninsula now, like the Historic Cigar Factory.

Things to Do and Places to Drink in Eastside

Check out the Palmetto Brewing Company on Huger Street. I would also recommend grabbing a drink at the dive bar known as the Palace Hotel. The Cigar Factory is pretty cool too, though that’s about it here for now.

This is kind of an odd area. Walking or driving this area shows more empty lots, empty buildings, and poorer neighborhoods. But gentrification is taking hold here as well, as more restaurants move into this area. Even prices for office space here in burnt-out old factory buildings is insane. Some notable restaurants here include Butcher and Bee, Edmund’s Oast, and Royal American.

Radcliffeborough stretches from the Medical University of South Carolina campus to King Street. It goes from Calhoun Street to Morris Street. This is largely residential, but abuts the rapidly-growing Upper King Street, so it has got a few good restaurants and bars going for it. Kudu Coffee and Beer and Brown’s Court Bakeries are both in this neighborhood, and are in my opinion two of the best Charleston coffee shops.

Off one of its streets sits the Cathedral of Saint Luke and St Paul, the cathedral of the Episcopal diocese of South Carolina.

This historic downtown Charleston borough is quaint. It features little parks hidden along quiet streets throughout the neighborhood. The part of Mazyck-Wraggborough that abuts King Street and Meeting street includes some pretty cool spots. Sweet spots include Music Farm, the Charleston Music Hall, and the Charleston Museum. This neighborhood also has the famous Mother Emanuel AME Church on Calhoun Street, site of the recent Charleston shootings. Until recently, all the neighborhoods mentioned before were either majority or largely black-dominated. South of Calhoun Street features neighborhoods that have been white-dominated for longer, starting with Harleston Village. The Village of Harleston is one of the larger boroughs in downtown Charleston, and one of the earliest incorporated. Full settlement was slow, however, as much of the land is fill from the former marshes and swamps. Today, the neighborhood is filled with quaint homes and major tourist attractions like the College of Charleston and Colonial Lake.

The only way I can describe the Ansonborough neighborhood is quaint. The little streets lined with row homes and larger historic mansions are worth wandering through from Calhoun Street down to Market Street. Anson Street is one of my favorites streets to wander down in all Charleston. The Gaillard Auditorium is in the Ansonborough neighborhood, as is the Kahal Kadosh Beth Elohim.

The French Quarter began when French Protestants (called Huguenots) settled in Charleston after their eviction from France. It’s often called the Charleston French Quarter to differentiate it from the more famous neighborhood in New Orleans. When tourists think of Charleston, they usually think of this borough of downtown. Quaint little streets, some cobblestoned, are full of historic homes. In fact, one of the oldest still-standing buildings in Charleston, the Pink House, is here. The Charleston French Quarter is famous for its restaurants, its art galleries, and many famous historical sites. Some of the top tourist attractions in the neighborhood include Waterfront Park, the Dock Street Theatre, and St. Philip’s Episcopal Church and the French Huguenot Church.

My favorite rooftop restaurant and bar in downtown Charleston is in this neighborhood: the Rooftop at the Vendue. 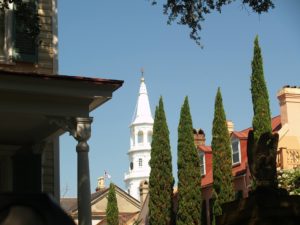 Way down at the bottom of the peninsula lies the neighborhood most visitors come to see (but most residents rarely visit): the South of Broad neighborhood. There isn’t much here aside from beautiful old mansions and some art galleries on Broad Street. But it’s still pretty, and a relaxed place to wander around on an easy Sunday afternoon. South of Broad, or Charlestowne as it’s officially called, includes such attractions as the Nathaniel Russell House, Edmondston-Alston House, Rainbow Row, and White Point Gardens.

Which Historic Downtown Charleston Borough Is Right for You?

If you’re looking to establish yourself downtown, you have more options. Your top choice of the best places to live in Charleston, SC, depends on with whom you’d like to rub elbows.

College students cluster around the College of Charleston and MUSC, so Radcliffeborough, Harleston Village, and King Street. Just like the gays and hipsters, college students are wherever rent is cheap. Many are moving into the neighborhoods north of the Crosstown and Eastside.

The best Charleston neighborhoods for families in downtown Charleston is likely the same area: Radcliffeborough, Harleston Village, and then Hampton Park Terrace and Wagener Terrace.

What About the Fabulously Wealthy?

Wealthy families retirees, or just people with too much money on their hands live south of Calhoun street. That said, the 1% is pushing those slightly less fortunate up the peninsula. That has the effect of driving those even less fortunate either further up or off of historic downtown Charleston.

You can find the best time to visit Charleston, SC, for you elsewhere on our site. And if you’re overwhelmed by how expensive a visit to Charleston (or living here) is going to be, check out our list of the best free things to do in Charleston, South Carolina!